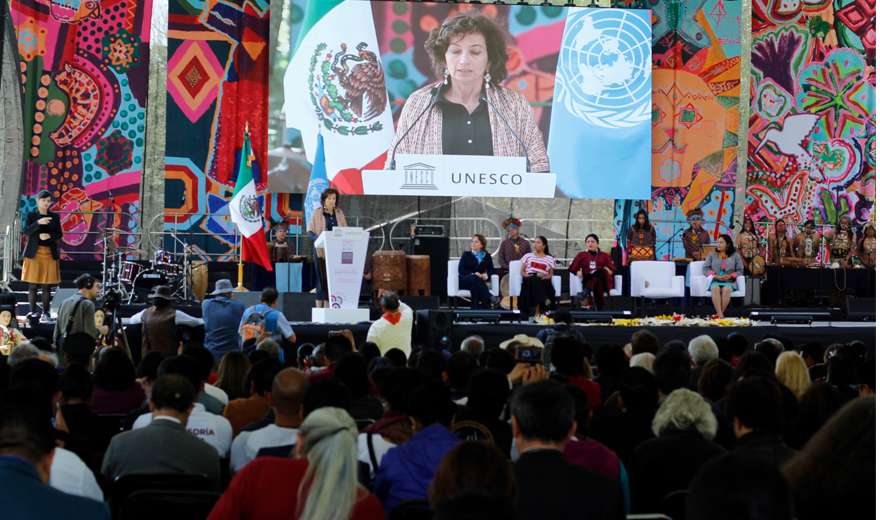 The two-day event held from February 27-28, 2020, was organized jointly by UNESCO and the government of Mexico to review the results and lessons learned from the International Year and to make concrete recommendations for the development of a global plan of action for the International Decade. The event brought together close to 500 participants, including government officials, Indigenous leaders, linguists, researchers, experts and other stakeholders, from over 50 countries.

According to Alexsei Tsykarev, one of the members of International Steering Committee for the IYIL 2019, the high level event provided a space for prioritization and identification of strategy, working modalities for the Decade. Moreover, it provided the opportunity to create synergy among key stakeholders. It also helped to pave the way for planning and promoting Indigenous languages in education, media, new technologies and institutions. The strategic outcome document emphasizes Indigenous Peoples’ rights to freedom of expression, to education in their mother tongues, and to participation in public life using their languages, as prerequisites for the survival of Indigenous languages, many of which are currently at risk of going silent.

The strategic outcome document is now one of the grounding documents for Decade. It will be further developed, furnished through discussions and dialogues conducted at different forums such as the UN Permanent Forum on Indigenous Issues (UNPFII), Expert Mechanism on the Rights of Indigenous Peoples (EMRIP) and other venues used for wider consultations. Some states have already expressed their commitment to form a national steering committee for the International Decade of Indigenous Languages.

“The International Year was a great success in changing the mentality of everybody, including policy makers, regarding Indigenous languages. Yet there is a lot to do in the Decade. States have expressed commitment to reform existing and devise  new policies, integrate Indigenous languages in curricula, and provide services in Indigenous languages. This good will needs to be reflected during the decade,” says Tsykarev.

The revitalization of Indigenous languages means using them in public lives, in justice systems, health programs, the media including in digital technologies. Experts agree that Indigenous languages are particularly vulnerable because many of them are not taught in schools and are not used in public spheres.

Some of the lessons of International Year of Indigenous Languages, 2019, is that Indigenous Peoples are doing a lot for revitalizing their languages. They don’t need great amounts of resources. They just need commitment from governments to make those local initiatives become public policies and national programs, and to continue the flow of resources.

“Some of the lessons of IYIL is that Indigenous Peoples are doing a lot for revitalizing their languages. They don’t need great amounts of resources. They just need commitment from governments to make those local initiatives become public policies and national programs, and to continue the flow of resources. Teachers working without salaries should get salaries. Documentaries made in their language should be widely promoted and distributed,” says Myrna Cunningham (Miskita), former chair of UN Permanent Forum on Indigenous Issues.  “The lesson from Latin America is that we could get the commitment from governments to create regional institutes on Indigenous languages, which provided space for technical assistance to the government, for organizing exchanges between Indigenous organizations to learn from one another, for gathering information that is produced in different languages,” she adds.

Undoubtedly, IYIL helped Indigenous languages get visibility internationally and the UN  and UNESCO played an important role towards this end. “We still need our languages to be living languages. We need our languages to be supported. We need public policies, resources, programs to integrate our languages in schools, institutions, in media, and public services. Some steps we have already taken. Next, we should be continuously sensitizing governments, and bringing Indigenous Peoples’ organizations into the planning. The decade can only be successful if Indigenous Peoples’ organizations really feel that it is their decade, as they are the main actors,” says Cunningham.

The years 2020 and 2021 have been defined as preparatory for the International Decade and not merely for defining a plan of action. The plan of action will be supported by grassroots Indigenous efforts and and other stakeholders at both national and international levels. “IYIL was a great success. It could have been more successful if we had action plans, and strategies in advance, and mobilized resources. We will have more chances in the Decade, thus this event is for planning for that decade,” says  Aili Keskitalo, president of Sami Parliament, one of the members of International Steering Committee for IYIL. “Some of the lessons learned during IYIL was the question of funding. Many Indigenous languages, Indigenous Peoples are struggling for funding for their activities. They are not able to take part if they don’t have funds for activities. We had many challenges. In Asia for example, there are many different languages, many different Indigenous Peoples. There were challenges in coordination. In the Arctic, the situation was the same.  In the region, we have a lesser population, but as we live in different circumstances, we speak different languages and have different infrastructures.”

As the popular saying goes, “every cloud has a silver lining,” Aili Keskitalo sees hope in the Decade. Her hope is that during the decade, the world will be able to strengthen languages and bring back those that are severely endangered. The International Decade of Indigenous Languages can be that platform to confront that negative spiral so that severely endangered Indigenous languages are made once again spoken by many. Indigenous Peoples themselves are capable towards achieving this goal, if the world partners with them and makes alliances and dedicates sufficient resources. We are now one step closer to the vision where Indigenous languages are used in everyday lives.

The Declaration is avialable here: https://en.unesco.org/sites/default/files/los_pinos_declaration_170720_en.pdf

--Dev Kumar Sunuwar was a participant at the high-level event.