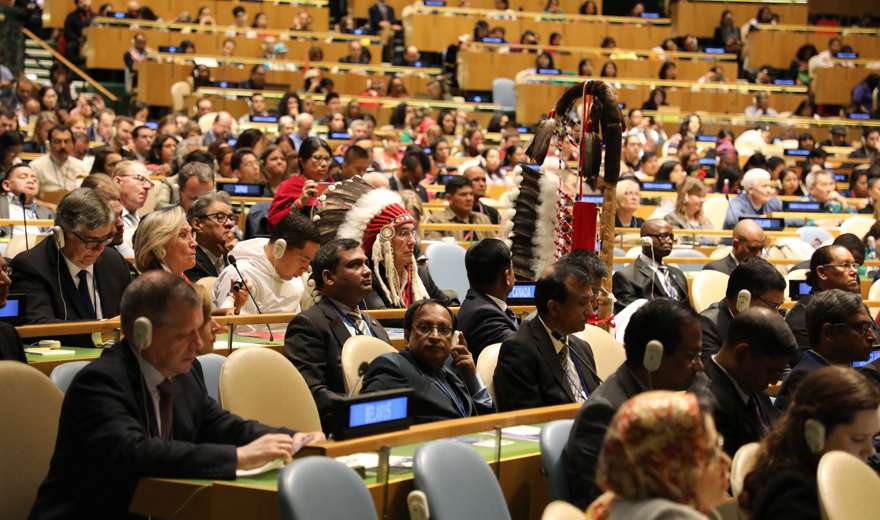 Agenda Item No. 4, Human rights: (a) Implementation of the United Nations Peoples Declaration on the Rights of Indigenous Peoples (UNDRIP)

Distinguished madam chair, our warm greetings to you,

First of all, we would like to thank you for giving us this opportunity on behalf of Nepalese Indigenous Peoples.

We would like to express the concern on the denial of minimum human rights of Nepalese indigenous peoples, their access to participation in administration, development; decision making process of the state building and their recognition of identity.

Every one of you, are well-aware that, for last three-years, Nepal is in the process of writing a new constitution through constituent assembly. But the Nepalese indigenous peoples are still fighting for their meaningful participation in it and inclusion of their rights in the constitution.

It is the fact that indigenous peoples are the main victims of 'so-called development, globalization and militarization in the name of democracy and development. Currently, the_ government of Nepal has deployed security forces in various eastern parts in the name of security, which has suppressed the indigenous peoples' movement. Similarly, by declaring the 'energy emergency' the government has introduced a bill called 'energy crisis bill', which has deprived indigenous Peoples from their historical lands and natural resources, so as to raise their voices against those projects initiated without free, prior and informed consent in their areas.

The government has already ratified the ILO C 169 and is signatory of UNDRIP but the government of Nepal seems needless in their effective implementation. The government has neither ensured the participation of indigenous peoples in the National Human Rights Commission (NHRC) and in the decision making level of REDD program. Therefore, indigenous peoples are continuously facing the denial of their basic human rights, recognition of their genetic resources, traditional knowledge and access to benefit sharing. Declaration on the Rights of Indigenous We believe that it is important to recognize Indigenous Peoples right to self-development, right to self-government and the right to self-determination for their overall development.

Therefore, we would like to draw your attention and make following recommendations, madam chair,

2. We urge all the government to ensure the meaningful participation of indigenous peoples in every decision-making level and ensure that they are fully informed, consulted and sought the consent, in regards to the policies, plans, programs and projects in indigenous peoples' lands and territories.

3. We urge all governments to ensure the indigenous peoples' right to education in mother tongue.

4. Urge all the government to ensure and implement the FPIC in the process of every kind of projects that are undertaken in the Indigenous Peoples areas. Regarding the implementation of FPIC in the Land, territory and resources of indigenous peoples, we ' recommend International Finance Institutions (IFIs) to include FPIC in their policy formulations, the forest policies and programs, and the global policies on REDD. These policy formulations should be guided by the UNDRIP, and we also recommend UN to monitor the implementation of these at national and regional level.

To conclude, we strongly urge to mainstream indigenous peoples' issues and recognize Indigenous Peoples rights within the UN System and the state policies. Similarly, we also-- urge all the international communities and the states to respect the rights of indigenous Peoples as a conflict resolution measures and for the sustainable development.

The original joint statement made during 10th session of UN Permanent Forum on Indigenous Issues (UNPFII), held on 16-27 May 2011, New York, USA,download here