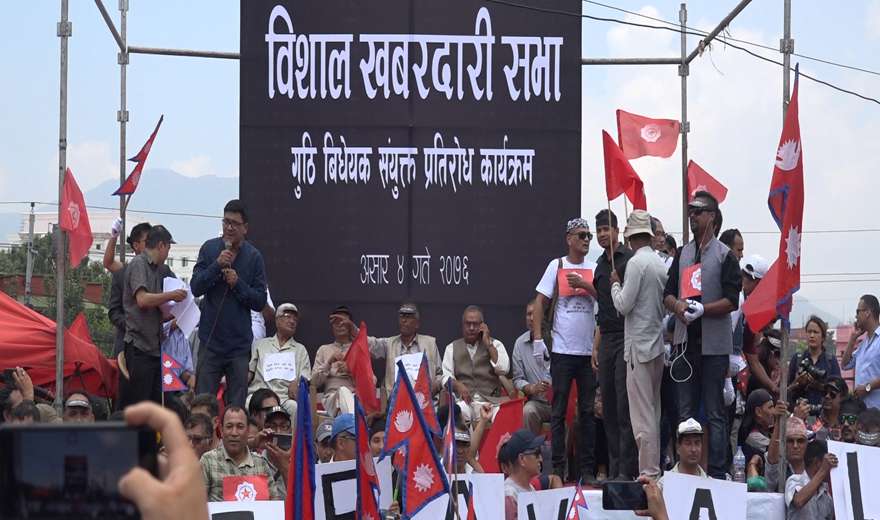 On June 26, 2019, after over a month of continuous and massive movements by Indigenous Peoples, especially by Newar Peoples in Kathmandu Valley, the Nepalese government finally was forced to withdraw the Guthi Bill. This Bill would have permitted the regulation of customary land trusts in the National Assembly, the supreme legislative body of Nepal.

On April 29, Minister of Land Management, Cooperative and Poverty Alleviation Padam Kumari Aryal had introduced the Guthi Bill at the Upper House stating the government’s aim to regulate all religious sites and to nationalize centuries-old Guthi (both public and private), a religious social management customary institution, proposing to form a powerful commission, replacing existing Guthi Sasthan, government’s corporation to oversee Guthis across Nepal.

From the very day the Bill was introduced in the National Assembly, Indigenous Peoples across Nepal took to the streets stating that the Bill would wipe out centuries old customs and traditions.

From the very day the Bill was introduced in the National Assembly, Indigenous Peoples across Nepal took to the streets stating that the Bill would wipe out centuries old customs and traditions.

On June 19, thousands of Indigenous people gathered in Maitighar Mandala, an amphitheater in Kathmandu, next to Singadurbar (where almost every decision about the country is made) carrying placards, banners, national flags, in colorful attire, to protest the controversial Bill. The protest was even dubbed as one of the biggest protests in the history of the Peoples’ movement in Nepal.

“Government thrashed us with batons and even used water cannons to disperse us. Many of us were injured,” says Ganapati Lal Shrestha, coordinator of the Joint-struggle Committee, “but we continued our rallies and mass meetings.”

“Newar Peoples had introduced Guthi, the religious social management customary institutions back in the fifth century, during Lichchhavi period in order to organize religious and social festivals, take care of temples, monuments, to worship deities, conduct funerals, and other religious rituals,” says Historian and Professor Dr. Triratna Manadha, adding, “Guthi is a unique system that exist among Newar communities in Nepal which manage all forms of social, religious, culture and all other rituals of Newar people. There are different forms of Guthi, public Guthi (which operate with support from government), private Guthi (which are run by members of the same linage), and Guthi also formed in order to take care of temples, monuments, water spouts, mainly for their renovation, repairs and restorations. In the past, Guthi was known as ‘Gosthi,’ which facilitates all rituals from birth to death, taking care of temples.”

Newar Peoples had introduced Guthi, the religious social management customary institutions back in the fifth century, during Lichchhavi period in order to organize religious and social festivals, take care of temples, monuments, to worship deities, conduct funerals, and other religious rituals.

The unique part of Guthi is the land endowment to temples. Since the ancient period, when a group of people built temples, stone sprouts or rest houses, and kept land endowments for repairs, restorations and also for performing rituals. The endowments were varied from small rituals to conducting big festivals. Many people endowed their land to temples with the belief that the offerings would bring welfare to family. In addition, especially during political turmoil in Nepal, the land endowments were also made to avoid land confiscation. The land endowments over the course of time became a great resource for continuing festivals, taking care of temples and monuments, and also became associated with the land tenure system, religious and philanthropic endowments, foundations, trusts and so forth. A family or group of Indigenous communities have long been maintaining Guthi usually by generating income from commonly owned lands.

Shah rulers in Kathmandu valley, especially after 1769, used Guthi land to fund wars, also to build palaces, government buildings, public hospitals and even airports. In 1964 the Guthi Sasthan Act (Guthi Corporation Act) nationalized all Guthi land and formed the Guthi Corporation. The government through the Corporation then started to fund rituals, festivals, and other events breaking down Newar’s customary practices. The result was loss of land because of misappropriations causing many Guthis to stop functioning, leading to the extinction of many rituals and festivals.

Despite strict government rulings, the Guthi system continued for several generations uninterrupted. Guthi had been in practice and handed down for generations, long before the existence of modern Nepal.

There are over 2400 public and private Guthis, largely managed by Newar Peoples. Guthis undertake religious and social ceremonies on the basis of funds generated from an estimated 1.45 million hectares of land under the ownership of Guthi.

According to Guthi Sasthan, there are over 2400 public and private Guthis, largely managed by Newar Peoples. Guthis undertake religious and social ceremonies on the basis of funds generated from an estimated 1.45 million hectares of land under the ownership of Guthi.

Newar people for centuries have been safeguarding cultural heritage both tangible and intangible in Kathmandu Valley through Guthi. The prominent religious and social festivals, the traditional rituals celebrated with great fanfare in Kathmandu Valley, include Indra Jatra, Rato Machhindranath Yatra of Patan, Bisket and Bhairav Rath Yatra of Bhaktapur have been sustained through Guthi. The arts, festivals, feasts and every cultural treasures of Kathmandu have been protected not by the government but by Indigenous communities in Nepal through Guthi.

“Guthi is history, and a fundamental medium for preserving the art, literature, religion of various Indigenous communities, particularly of Newar communities. It is the cultural heritage and identity of Indigenous communities. Guthis therefore are of great importance for Newars,” says, Shree Krishna Maharjan, a well-known j Newark journalist, adding, “the cultural treasures, both tangible and intangible heritages preserved throughout history is our pride, part of our civilization and our identity.”

A young leader of Nepali Congress and member of parliament, Gagan Thapa, while addressing the parliament said, “Guthi has tied all Newar Peoples in such a way as the web of blood vessels has entwined whole body. As blood vessels circulate blood to all organs of the body, Guthi has kept the Newari community alive.”

Indigenous Peoples believe that with ill intention the government through the Bill wants to erase their history wiping-out customary institutions of various Indigenous communities across the country.

Indigenous Peoples believe that with ill intention the government through the Bill wants to erase their history wiping-out customary institutions of various Indigenous communities across the country. Therefore, thousands of Indigenous people took to the streets against the Bill, holding protests, mass meetings, and rallies calling for immediate withdrawal of the Bill.

According to Newar activists, the government introduced the Bill in parliament without any proper study and consultation with concerned representatives. The Bill is also against the constitutional rights of the citizens as provisioned in Article 26 (2) of the new Constitution of Nepal, 2015, which says, “every religious denomination shall have the right to operate and protect its religious sites and religious Guthi.” Furthermore, Article 4 of the Constitution provisions include protection of religion and culture handed down from time immemorial.

Similarly, Article 290 of the Constitution relates to Guthi, and parliament shall make necessary laws relating to Guthi, in a manner not to be prejudicial to the basic norms of the Guthi.

The Bill’s sections 23 and 24 included ambiguous provisions, about the proposed Guthi Commission which would be allowed to take over all rights and responsibilities of the Guthi. The Bill would take precedence over all other rights, documents and past agreements, even court orders. Similarly, Section 4 (6) of the Bill also proposes to nationalize and regulate all private and public Guthis, which according to members of Guthi, is insensitive and will disregard different kinds of Guthis and their functions in Newar society. The private Guthis were founded by and exclusively for family members who share the same lineage, and outsiders are barred from the Guthi’s rituals. If the government nationalizes Guthis, it will cause a loss not only to centuries old customs and traditions, but to history and Nepali civilization.