Road Expansion drive in Kathmandu: why people are protesting, and what's the way out? 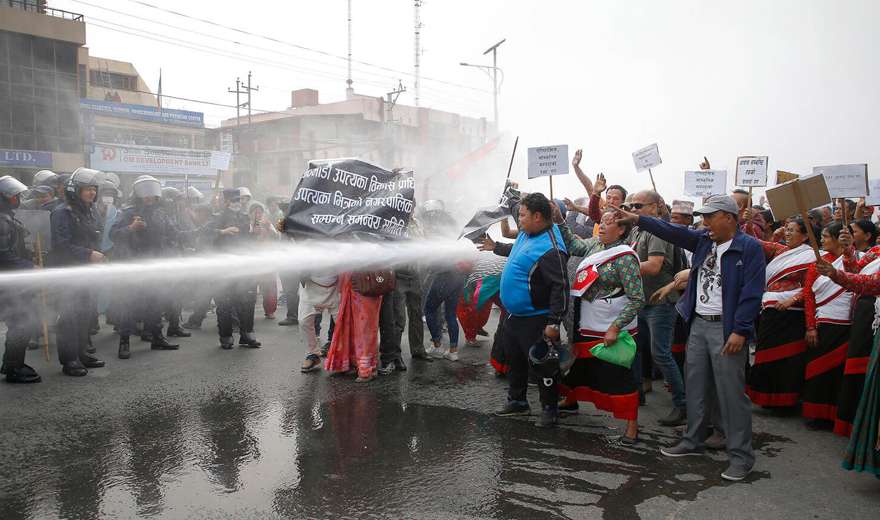 In Nepal, road construction has always been associated with development. So it is no wonder that all three tiers of government have given priority to building new roads and expanding the existing ones, especially after the first elections under the 2015 Constitution. Even in the Kathmandu Valley, many roads are now being expanded and upgraded. However, what should have been a sign of development has turned out to be a grim tale of destruction and displacement for the Newars -- a native indigenous people of the Kathmandu Valley.

Not just roads but all physical infrastructure projects are being built without consulting, and prior informed consent of indigenous communities.  Local people are rarely consulted and included in any development project. To be sure, the law requires development plans to be made based on the demands collected from the grassroots, and only after multiple rounds of consultation with local communities. However, top authorities and planners always find a way to shirk such an obligatory consultation process. At best, they hold meetings and interactions with stakeholders, but grassroots indigenous people are often left out of the consultation process. As a result, almost all development projects court controversy, often sparking off protests from project-affected people.

If local people were consulted and projects were started only after securing their prior informed consent, the clashes between police and people could have been avoided.

In Kathmandu, local indigenous Newar people have been protesting against road construction and expansion in a coordinated way. If local people were consulted and projects were started only after securing their prior informed consent, the clashes between police and people could have been avoided in the areas where roads are being expanded and upgraded by demolishing houses and private infrastructures.

2007 is considered to be an important year in the struggle for recognition of the rights of indigenous people in Nepal. On September 13 that year, Nepal signed the UN Declaration on the Rights of Indigenous Peoples (UNDRIP). On the following day, Nepal also endorsed the International Labour Organization (ILO) convention 169. Both these international legal instruments have asserted indigenous people's pre-emptive rights over their ancestral properties, especially land, forest and water sources.  Also, according to these international laws, the government must inform local indigenous people in their own language about any development, industrial and economic activities planned by it. Such activities can be started only after thoroughly consulting them, and securing their prior informed consent.

Nepal's constitution and Environment Protection Act have also made it mandatory to carry out Environment Impact Assessment (EIA) before carrying out any development and infrastructure projects.  The article 27 of the Constitution has also guaranteed people's rights to information about public concerns. Even in Local Self Government Act 2055 BS, it was mentioned that Adivasi Janajati and local people would have to be consulted in identifying, planning and implementing development activities through local councils. But these national and international legal instruments have always been brushed aside while implementing development projects in Nepal, excluding indigenous people from the consultation process. To prevent local people from protesting against injustice done to them in large-scale development projects, the government declares them national priority projects and deploys the army to suppress public voices.

Consulting local people to be affected by development projects and addressing their concerns is a widely accepted norm. However, such a norm has no or little value in Nepal.

In Kathmandu, local Newar community people say they are even denied of information about road projects that could displace them. Consulting local people to be affected by development projects and addressing their concerns is a widely accepted norm. However, such a norm has no or little value in Nepal. The project-affected communities are rarely consulted, let alone addressing their concerns. As a result, local people do not have a sense of ownership in such projects. In many cases, they even take to the streets, as seen in the Kathmandu Valley.

Suman Sayami, the coordinator of a struggle committed formed by local Newar communities affected by road expansion projects, says: "We are not against road expansion. Roads can be expanded, but only after consulting the affected people. We are not against development, but we want an end to the destruction that is happening in the name of road construction".

We are not against development, but we want an end to the destruction that is happening in the name of road construction.

Sayami says they will allow road expansion only if the government informs them in advance, consults them about their concerns and provides adequate compensation for the damage to their houses and private properties. Local people say private houses and properties are being damaged in the name of road construction especially in Kalanki, Thankot, Tokha and Sankhu areas. They have moved the Supreme Court, demanding an order against road expansion without adequate compensation. In response, the apex court has ordered the government to expand roads only after providing adequate compensation to those people whose land will be acquired and houses destroyed during the process. Through the Lawyers' Association for Human Rights of Nepal's Indigenous People (LAHURNIP), they had also filed a complaint at an ILO committee tasked with hearing cases of human rights violation. The committee has asked the Nepal government to address the concerns raised by local Newar people affected by road expansion projects. The interventions by the ILO committee and Nepal's apex court have come as a huge relief for Kathmandu's Newar families, who face a threat of displacement by the road-widening drive.

Development works that disregard human rights may bring prosperity, but that prosperity will not be for all. Equal and inclusive growth could be possible only if human rights are addressed in development plans. LAHURNIP's secretary and advocate Shankar Limbu says: "Who do we deliver development for? If it is for people, it would be important to respect their human rights. Without it, there will not be sustainable development".

Development should serve the purpose of increasing the quality of life for people. But the way roads are being developed in Kathmandu is only worsening the living condition of indigenous Newar people. Advocate Jitendra Bajracharya says: "Our constitution and related laws have protected private properties. But private properties are being destroyed in the name of development in Kathmandu. And 99% people affected by road construction are indigenous Newar people".

All we are demanding is the government respect human rights; listen to indigenous people; and include them in the development process.

Advocate Limbu says Nepal has left behind a tragic history of political conflict but is being sucked into another form of conflict over development. He says the State is solely responsible for this new phase of conflict. He says: "All we are demanding is the government respect human rights; listen to indigenous people; and include them in the development process".

Activists fighting against the road-widening drive that is displacing people say they are not against development, but local people need to be consulted first. Activist and writer Sneh Sayami says: "When development projects are implemented on the land of indigenous people, they have to be consulted. It would be important to secure their complete, effective and meaning participation in every step of development. And the benefits of development should be distributed in a fair way".Sayami sums up what local indigenous people are telling the government: "You can demolish our houses; you can widen roads; but first inform us about your plan in the language we speak and understand. And protect our rights over our private properties".