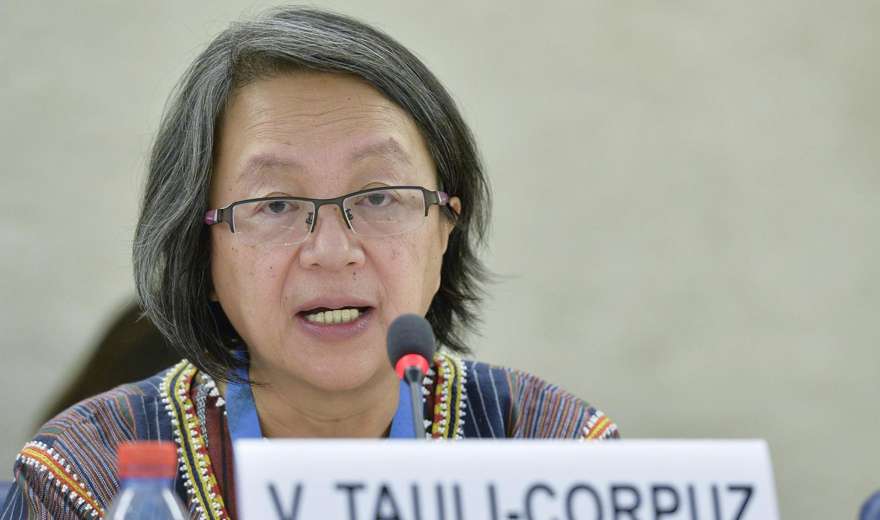 When Victoria Tauli-Corpuz was appointed to the mandate of UN Special Rapporteur on the Rights of Indigenous Peoples in May 2014, she perhaps thought that it would be smooth going,  reporting on the situation of the world’s Indigenous Peoples and then drawing relevant conclusions. But after a six-year appointment as special rapporteur, according to her, the mandate is “an uphill battle.”

Victoria Tauli-Corpuz is from the Kankanaey Igorot Peoples of the Cordillera region in the Philippines and is wrapping up her six-year-long tenure in April 2020. The UN special rapporteur is an independent human rights expert mandated to examine, monitor, advise and publicly report on the human rights issues to the UN Human Rights Council and UN General Assembly. This special procedure was envisioned by the Human Rights Council to report and advise the Council on human rights from a thematic or country specific perspective. There are currently 44 thematic and 12 country mandated special rapporteurs.

“I liked the mandate, because it brought me to the Indigenous communities in different parts of the country, which I would never have had if I was not the Special Rapporteur on the Rights of Indigenous Peoples,” says Tauli-Corpuz, “now I have a better understanding of the concrete living situations of Indigenous Peoples in the most remote areas in the world. Because I had an opportunity to visit them and talk to them.”

I have a better understanding of the concrete living situations of Indigenous Peoples in the most remote areas in the world. Because I had an opportunity to visit them and talk to them.

She further says, “the mandate also gave me the opportunity to talk directly to the governments when I got the communication from the Indigenous Peoples on their alleged human rights violations, when I had country visits,” she says. “I got confident as I increased my knowledge significantly about Indigenous Peoples’ realities and the ways governments are dealing with these issues. I became more aware of the national laws, recommendations from various UN Treaty Bodies, the Universal Periodic Review that addresses the issues of  Indigenous Peoples and was also able to communicate widely with the media.”

Like her two predecessors, as Special Rapporteur, Tauli-Corpuz investigated the state of human rights for Indigenous Peoples across the globe. She acted as an independent expert, produced six thematic and ten country specific reports to the Human Rights Council, based on ten different country visits, mainly in Latin America and Europe, where she interacted with Indigenous communities and state officials. Notwithstanding the progress that has been made during her six-year-long tenure,  she says, “the achievements I accomplished are insufficient considering the magnitudes of problems that Indigenous Peoples are facing globally. These are still a matter of deep concern.”

There is still a high level of discrimination, racism, economic and social disadvantages felt by Indigenous Peoples around the world.

There is still a high level of discrimination, racism, economic and social disadvantages felt by Indigenous Peoples around the world. According to Tauli-Corpuz, as special rapporteur, she also took some concrete actions to help release  Indigenous leaders and activists who were put in jail due to false charges or displacements in the name of development projects, for instance in India and Kenya.

The first UN Special Rapporteur on the Rights of Indigenous Peoples was a Mexican sociologist, Dr. Rodolfo Stavenhagen, who served from 2001 to 2008. Followed by U.S. legal scholar Professor James Anaya (Apache and Purépecha), who served terms from 2008 to 2014. Victoria Tauli-Corpuz came to the rapporteurship from a background as an Indigenous rights activist, social development consultant, civic leader, human rights expert, public servant, and an advocate of women's rights. She was the former chair of the UN Permanent Forum on Indigenous Issues (2005-2010) and was actively engaged in drafting and adoption of the UN Declaration on the Rights of Indigenous Peoples in 2007. She helped build the Indigenous Peoples' movement in the Cordillera as a youth activist in the early 1970s. She helped organize Indigenous Peoples at the community level to successfully defeat the projects of the Marcos dictatorship such as the Chico River Hydroelectric Dam and the Cellophil Resources Corporation. Tauli-Corpuz is the founder and executive director of Tebtebba Foundation (Indigenous Peoples' International Center for Policy Research and Education) and has founded and managed various NGOs involved in social awareness raising, climate change, the advancement of Indigenous Peoples' and women's rights. She is a former board member of Cultural Survival. She is an expert for the UN High Commissioner for Human Rights and has served as the chairperson-rapporteur of the Voluntary Fund for Indigenous Populations. She is also the Indigenous and gender adviser of the Third World Network and a member of United Nations Development Programme Civil Society Organizations Advisory Committee.

I tried to get Indigenous Peoples rights better recognized, protected and put into practice in a reality.

“I tried to combine my mandate as special rapporteur with activism, wherever I went during my visits, I advised Indigenous Peoples what to do to get their rights better recognized and protected,” Tauli-Corpuz comments, further adding “I tried to get Indigenous Peoples rights better recognized, protected and put into practice in a reality. The most important successes drawn from different experiences is the empowerment of Indigenous Peoples. Their concerns are legitimized in their reports. So that they may feel that they have been visible and they are aware of having international attention and getting international support for their problems.”

The weakness of UN special rapporteur perhaps is the obtaining the formal invitation from the State governments. The country visits of special rapporteur depends on formal invitations of government, which put huge limitations, as many state governments are not open to accept the request made by independent experts for their country visits in many states specially where Indigenous Peoples’ rights have massively been violated.

During her tenure, as a part of her mandate, she made official visits to ten countries: Ecuador, Timor Leste, Mexico, Guatemala, USA, Australia, Brazil, Honduras, Paraguay and the Sapmi region covering Norway, Sweden and Finland. When countries are reluctant to invite the Special Rapporteur, Indigenous Peoples and their supporters like academic institutions can play a decisive role by lobbying their government to issue an invitation.

“Even if you visit a country at the invitation of academic institutions, you cannot make an official report out of it. There is a need to encourage many governments to invite Special Rapporteurs, because that is what this whole mandate is all about. Moreover, Indigenous Peoples should make best use of the mandates of Special Rapporteur extensively.  I regret that I could not make any official visits to Asia and only a few visits to Africa, where there is a huge population of Indigenous Peoples who are facing a number of problems,” she states, adding, “‘I tried, but the governments were hesitant to send official invitations in my request.”

Tauli-Corpuz also felt constrained by the lack of resources and UN assistance for the Special Rapporteur mechanism, especially comparing the volumes of work that needs to be performed having international mandate and the global goals of the Special Rapporteur. However, she still feels that during her six-year long tenure she wishes she could have accomplished more. Funding for Indigenous communities is insufficient considering the magnitudes of problems that Indigenous Peoples face globally.

Note: This article was produced based on a radio interview conducted with Victoria Tauli-Corpuz to assess her mandate as Special Rapporteur on the Rights of Indigenous Peoples.