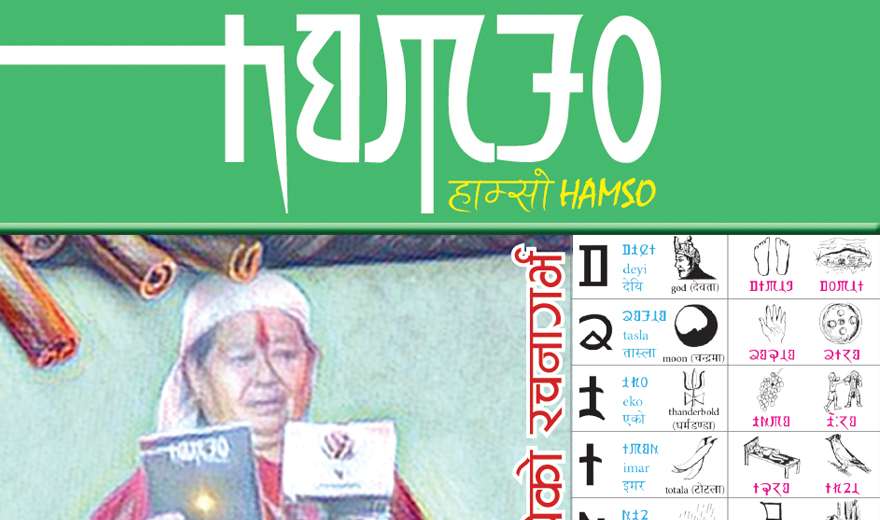 Sunuwar Indigenous Peoples of Nepal have embarked on a new mission to preserve and revive their mother tongue, ushering in the UN International Decade of Indigenous Languages (2022-2032). Aided by international experts on language digitization, they are digitizing their Sunuwar script: Koĩts-BreɁse.

Sunuwar is an Indigenous Nationality officially recognized as one of the 59 Indigenous Peoples of Nepal under the National Foundation for Development of Indigenous Nationalities (NFDIN) Act, 2002. They identify themselves as Koĩts, while others recognize them as Sunuwar, Mukhiya and so on. Their population is 55,712 according to the 2011 census, of which 37,898 speak their mother tongue Koĩts-Lo. Sunuwar Sewa Samaj in English known as Sunuwar Welfare Society in short SWS is an umbrella organization of Koĩts-Sunuwar Indigenous nationalities, founded legally in 1988 and has various constituent bodies, provincial and local committees as well as sister or the branches abroad.

Like most indigenous languages, Koĩts-lo is not written widely. Nor is it used to write literature extensively.

Like most indigenous languages, Koĩts-lo is not written widely. Nor is it used to write literature extensively. It is due to the lack of Unicode standard and TrueType font. It is only spoken as a household or community language. The use of Khas-Nepali language -- imposed upon Indigenous Peoples as official language -- in administrative works, judiciary, business, education and media has marginalized a myriad of mother tongues, including Koĩts-lo.

A brief history of Koĩts-BreɁse

The Sunuwar script Koĩts-BreɁse was inscribed on old animal skins. As the inscription was beginning to fade away, it was copied and re-engraved on fresh animal skins and brought into discussion by Hem Karna Sunuwar, a Sunuwar sage from Surikhari village of Dolakha district, in the 1940s.

In 1947, a second conference on the Sunuwar script was held in Dokhu Kaule village of Taplejung district. The conference brought together Sunuwar linguists and scholars from Dolakha and Sikkim and Darjeeling of India. But the conference did not yield significant results as it was the era of the Rana oligarchy, which promoted Khas-Nepali as the official language pushing the mother tongues of Indigenous Peoples into oblivion.

The Sunuwar script Koĩts-BreɁse was inscribed on old animal skins. As the inscription was beginning to fade away, it was copied and re-engraved on fresh animal skins and brought into discussion by Hem Karna Sunuwar, a Sunuwar sage from Surikhari village of Dolakha district, in the 1940s.

In the 1960s, Karna Bahadur Jentich, better known as KB Jentich who served in the Gurkha brigade of the British army from 1942 to 1968, collected and improved the Koĩts-BreɁse alphabetical order. He also promoted Koĩts-BreɁse by printing and circulating it.

In 1970, KB Jentich (Promoter of Sunuwar script, known as Jentich Script, based on Roman Script) and Tika Mulicha (Tikamuli Script based on Devanagari) agreed to promote both scripts. However, it was not possible to widely promote the script due to the State's one language policy.

K.B. Jentich was a photographer, too. He photographed and printed the Koĩts-BreɁse script engraved by Hem Karna Sunuwar. He then provided the documents to Balkrishna Mukhiya, who lived in Sukiya Pokhari, Darjeling. The documents were later handed over to the representatives of Sikkim Sunuwar (Mukhiya) Koĩts-bu, an organization formed to unite Sunuwar communities residing in Sikkim.

A delegation of Sikkim Sunuwar (Mukhiya) Koĩts-bu, which included General Secretary Dr. C.B. Mukhiya, Chairperson R.B. Mukhiya and Treasurer H.C. Mukhiya, submitted a memorandum to Pawan Kumar Chamling, who was then serving as Sikkim's Chief Minister. Through the memorandum, they urged Chief Minister Chamling to recognize Mukhiya script as the official language of Sikkim.

Finally, on 24 September 1996, the Sikkim government recognized Koĩts-Lo (Mukhia language) as one of the official languages of Sikkim, along with eight other languages (Lepcha, Bhutia, Limbu, Newari, Rai-Bantawa, Magar, Gurung-Tamang and Sherpa). The Sikkim government published gazettes, school curriculum and other books, poetry, historic journals, newspapers, academic works and other materials in Koĩts-Script. However, it remained in hand-writing form for many years.

In the 2000s, Dr. Lal Rapacha Shyãkarelu was studying at Jawaharlal Nehru University in India. He created additional fonts to develop TrueType font (Kirat 1.ttf), enable Sunuwar Indigenous People to type in their own script on computer. It made easy for them to publish books and newspapers in Sunuwar script.

In 1990, by endorsing the World Declaration on Education for All (EFA) and the Dakar Framework of Action-2000, the Government of Nepal (GoN) expressed its commitment to ‘ensuring universal right to all'. These international campaigns recognized to teach children belonging to linguistic minorities and make education contextually located and locally accessible.

In order to implement the international commitments, the GoN developed National Action plan of Action in 2003, National Curriculum Framework in 2005 and School Sector Reform Plan in 2009. The GoN also promoted Mother tongue-based multi-lingual education in Nepal.

Currently, 24 curriculums up to grade-5 in different languages have been developed, including in Sunuwar language. However, the medium of curriculum of many Indigenous languages, including Sunuwar, is Devanagari.

Currently, 24 curriculums up to grade-5 in different languages have been developed, including in Sunuwar language. However, the medium of curriculum of many Indigenous languages, including Sunuwar, is Devanagari.

During a UN high-level event held in Los Pinos, Mexico on February 28-29, 2019, I spoke on the role of 'media in revitalization of languages'. I was invited to speak at the event as the chairperson of Indigenous Television, one of official media partners of the UN.

At the event, I met with Ms. Jeannette Stewart, the Founder of Translation Commons. One year later, in May 2020, she made an amazing offer that her organization would take up the Sunuwar Script from Nepal as part of a pilot program to digitize indigenous language during the International Decade of Indigenous Languages.

The SWS always had a dream to digitize oral language into written language. For the SWS, the collaboration with Translation Commons was a huge stride toward realizing its long-cherished dream. It was made possible thanks to an international team of experts comprising Craig Cornelius (senior software Engineer at Google), Deborah Anderson (Script Encoding Initiative) and Anshuman Panday (Unicode encoding technical team).

Since May 20, 2020, a monthly meeting is being organized regularly to discuss and share updates on the progress in the digitization process.

Since May 20, 2020, a monthly meeting is being organized regularly to discuss and share updates on the progress in the digitization process.

In addition, Craig Cornelius of Google has developed an online keyboard, prototype keyboard/the layout, including sample converter, to public use areas character codes to show avenues for digitalizing the language. And, now finally, a draft proposal to encode the ‘Sunuwar Script’ in Unicode is ready on August 17, 2021. The International Unicode Technical committee is having a final meeting on September 10, 2021, to approve the Unicode.

The digitization of Koĩts-BreɁse is the process of converting Koĩts Sunuwar language into a computer readable format. It is the first step toward having Koĩts-BreɁse script available on various digital platforms; making newspapers, books and other printed materials available in Koĩts-lo; Sunuwar mother tongue on the web and internet world and more importantly to preserve and develop further Koĩts-lo (Koĩts Sunuwar script/language) through writing, a process to give transition from oral to writing and to strengthen the distinct ‘identity’ of Sunuwar Indigenous Peoples.

The digitization is also important for Sunuwar Indigenous Nationalities to end their dependency on other scripts such as—Devanagari, Romanized English, which are used for communication in email, messengers and other internet communication platforms. In the meantime, the digitization will also be helpful to bring into attention of international scholars to study on or explore about the ‘Koĩts Sunuwar Script’.

The digitization is also important for Sunuwar Indigenous Nationalities to end their dependency on other scripts such as—Devanagari, Romanized English, which are used for communication in email, messengers and other internet communication platforms.

The biggest challenge, however, is that Koĩts-lo (Koĩts language) is not written. It is more of an oral language. Members of Sunuwar community speak in Koĩts-lo at home but write in Nepali in school/college and work in English. This is the same old story for as many as 117 Indigenous languages of the total 131 languages spoken in Nepal (including 8 identified by Language Commission)

In recent times, over two-dozen Indigenous languages, including Sunuwar, have found space in newspapers. However, they are printed in Devanagiri script due to the lack of Unicode. Thanks to the collaboration with Translation Commons and the efforts of an international team, Sunuwar Indigenous People are no longer forced to use Devanagiri while writing their language on computers.

Once Koĩts-BreɁse (Sunuwar Script) is available in Unicode standard, the international team of experts will develop Unicode fonts for script with font designs, build in application systems into major computer software and hardware companies, adding into mobile devices with ‘Noto fonts’ of Sunuwar script. Furthermore, the team has a plan to work on converting the existing texts by building system for transliterating Sunuwar Devanagari into Sunuwar script.

Once this system is built, Koĩts Sunuwar Script will be available or accessible on all kinds of devices in computer, Mobile without a converter and will be possible to type and use them on online website and social media. And importantly, it will be helpful in documenting indigenous knowledge, more importantly the languages, which have been transmitted orally for generations and use Sunuwar script massively in education, media, information and communication. It will ultimately be helpful in preservation and promotion of oral language into writing.

If everything goes as planned, Sunuwar script from Nepal will be one of the models for digitization of the world’s Indigenous languages within the first year of the International Decade of Indigenous Language (2022-2032).